A few years ago one of my fourth-graders walked up to me during the last week of school and said, “Mrs. Lemonier, my grandpa’s a writer.”

Aren’t we all, I rudely thought. “What does he write?”

She introduced me to him in the parking lot and I asked what he’d written. He handed me a bookmark with his latest title and cover art, assuring me that yes, I’d be able to find his work on the shelves at Barnes and Noble.

So began my love affair with the Kris Longknife series by Mike Shepherd. 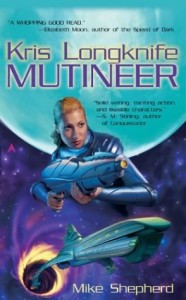 The first in the series, Mutineer, opens with Ensign Longknife mid-rescue mission. The first chapter is an action-packed one, interwoven with glimpses of Kris’s family history. As it turns out, Kris is the daughter of her home planet’s Prime Minister, who soon becomes a reigning monarch, leaving Kris with the unwanted title of Princess. She is young (early 20s), somewhat impetuous, and has a stubborn streak nearly as wide as the rebellious one that sent her to the Navy recruiting office. There are as many battles in space as there are behind closed doors among royalty, and there is no shortage of antagonists – human or alien – to keep Kris busy.

The books are military structure, strategy, and battles blended with alien races and technology, long-standing family feuds, and hostile takeovers of corporations and planets. Some readers may get antsy waiting for the military action to give way to exploration, or vice versa. I happen to love having a chance to come up for air and process the complexity of what I just read before heading into the next battle.

Most writers seem to think their female leads need romance to function, or that female readers will lose interest without it. For me, the opposite is true. I’ve never seen lead male characters so completely weakened or distracted by sexual tension as female lead characters are. Blessedly, Mr. Shepherd gives me a great story with a very focused woman at the helm. That’s not to say she’s a complete robot. The author does explore the difficulty of someone in her position considering a relationship.  As a woman, I also appreciate the author’s addressing the ridiculousness of putting an action-oriented character in a skin-tight vinyl costume and 4-inch heels.

The things I love most about this series are what set it apart from others. The author pulls no punches with his protagonist. She doesn’t always come out on top of every situation. When she does, however, it’s almost never without a price. She experiences deep loss, at times as a result of her decisions in the heat of battle. She does the best she can with the information and tools she’s been given, but 20/20 hindsight isn’t always kind. Like many of us, Kris wrestles old internal demons, learns and relearns how to trust, and continues to mature and grow with each lesson, some harsher than others, always learned the hard way.

I love science fiction, but often get bogged down in language created just for the specific universe of the book or series. Frank Herbert’s Dune series (which I love), for example, comes with a glossary in the back. Like all Sci-Fi authors, Mike Shepherd created concepts and words of his own for Kris Longknife’s world. Unlike others, however, Mr. Shepherd’s books aren’t so overrun with them I have a hard time remembering an obscure concept from book one that doesn’t pop up again until book five. A more hardcore fan of the genre might not appreciate this as much, but I don’t have time to become so immersed in any one book series that I could rattle off the manufacturer of the bolts used on the space battlecruiser on page 238 of book 6.

Another mechanism Sci-Fi tends to be overwrought with is deus ex machina. Sci-Fi writers often paint their protagonists into impossible corners, then drop a random, very obvious “out” in front of them. Not this series. This isn’t to say dei ex machina don’t show up from time to time, but quite often they are more subtle and less random than what most readers are used to. There are also times when Mr. Shepherd skips the concept altogether, forcing his protagonist to think her way out of situations. Anyone who has read some, but not all, of the series would argue with me that, when all else fails, Kris still has her computer, Nelly, around her neck. My rebuttal is: Keep reading!

In the interest of disclosure, I’ve been one of his proofreaders since Kris Longknife: Undaunted. But I do it for purely selfish reasons: the privilege and pleasure of being able to read the stories ahead of publication. I truly do love this series. These books take me on a roller-coaster ride, leaving me wide-eyed and breathless in one moment, laughing to myself in another, eager for the next email that a new manuscript is ready. It’s tougher than one might imagine, because I forget I have a job to do, and wind up having to re-read a lot.

Mike Shepherd began chronicling the story of Kris Longknife because he wanted his granddaughter to have a strong female character to read when she was old enough. Having devoured every book in the series, I’d say he has succeeded. 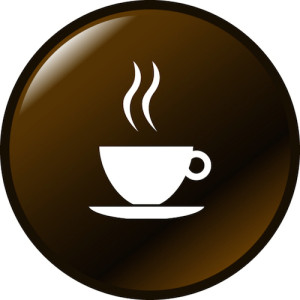